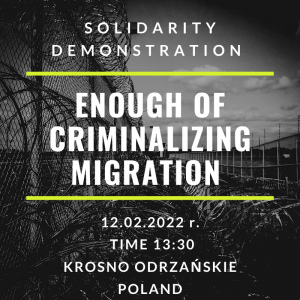 We will not forget about these people, even though the authorities are trying to do everything in their power to erase their existence from public awareness.

Migrating is not a crime. Everyone have the right to change their place of residence, wherever it is because they are seeking for a better life or not. However, despite the fact that they did not commit any crime, migrants are all over Europe prosecuted and imprisoned.

This is unacceptable! To show our solidarity we decided that we want to pay one of the retention centers a visit.

Freedom of movement is one of the basic human rights. For centuries, rulers and governments have tried to keep it under control. Today it seems to us that we live in a world where human rights are respected. But a brutal segregation of people is taking place in front of our eyes, between those who are “legal” and those who are “illegal”. The “illegal” ones are deprived of basic rights; the right to freedom – indefinitely imprisoned in the so-called “detention centers”, and the right to life – people detained after crossing the border, often on the verge of exhaustion, are taken back to the forest and abandoned there. We know about a dozen people murdered in this way, we have heard about several dozen from people rescued in the forest. Nobody knows how many lives have already been consumed by the border regime in Poland and Europe.

People who managed to fill asylum applications and those who, thanks to the efforts of many people and aid groups, were not taken to the forest, end up in closed retention centers. They do not know how much time they will spend there, they do not know at what stage their procedure is, they have no contact with their relatives or the outside world, they are held in overcrowded cells, and often do not even know where they are. The lack of information given to these people about their own case – supposedly there by administrative decree -, and the absence of a real legal framework makes the living conditions inside these centers even worse than in prisons. Weeks and months spent in these conditions, fearing deportation or more months in isolation, increases frustration, depression and bad health conditions. Completely deprived of the power to decide for themselves, they have little choice of means of protest. Hunger strike and revolt. These are the last resort measures. No one who is not brought to extremes chooses to risk their lives by starving themselves or by risking brutal pacification.

Anti-immigration propaganda makes it possible to arouse an irrational fear of “strangers” in society, which enables the introduction of further states of emergency and restriction of freedom not only for migrants, but for all society. Outwardly, entrepreneurs and politicians show concern through generously subsidized charities while in the background, in politics, they do everything to maintain the status quo – namely the dependency of the so-called ‘countries of the global south’. They ignore the fact that this dependency leads to war, inequality in the distribution of resources, flight and migration. Underpinned by media reports, we are becoming more and more accustomed to the fact that a life is worth different amounts depending on which side of the border we stand.

We do not agree to such objectification of people.

We want nothing less than to destroy the Fortress Europe and an end to the global system of borders.

Thus we make this open-call for an international demo in Krosno Odrzańskie, not far from where one of the most brutal retention center, Wędrzyn, is located.

On February 12th we call all organisations and individuals in solidarity to come and gather in Krosno Odrzańskie!

Bring your banners and friends! Take care of each other. Come prepared and autonomous.
Make sure to wear a mask. There will be food.