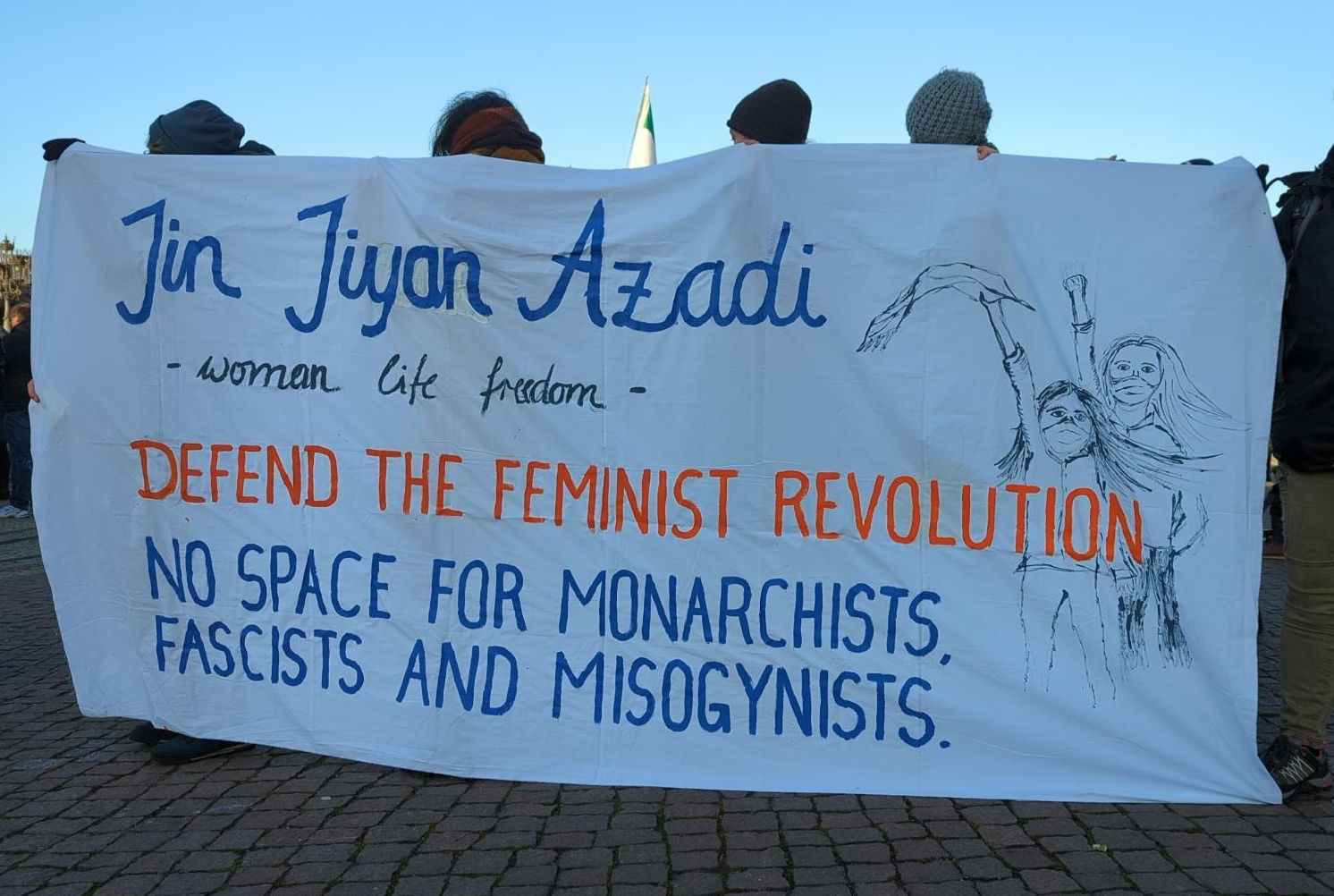 Today, 19 November 2022, the “Bloody November” 2019 in Iran was commemorated worldwide, also on the Theaterplatz in Dresden. We were at the rally with a banner to commemorate the murdered people in Iran and to show solidarity with the feminist revolution. There were several hundred people from Leipzig, Chemnitz and Dresden, mainly from the Iranian community.

In 2019, the Mullah regime had announced a 200% price increase for petrol. Back then, people in over 100 cities protested not only against the price increase, but also against corruption and mismanagement by the regime. Militant street fights developed and it seemed the beginning of a revolution. The regime met this revolt with brutal force. During the period from 16 to 21 November 2019, the internet was shut down in Iran. This left people isolated. Between 300 (Amnesty International) and 1500 (Reuters) people were murdered and thousands arrested during this period. More information can be found at DunyaCollective (in german).

Since the 1979 revolution and the beginning of the Islamic Republic, there have been many protests and uprisings against the regime. The feminist revolution that has started since the death of the Kurdish woman Jina Amini is part of a revolutionary process. The massive violence and oppression of minorities in Iran, the repressive regime that despises women and queer people, mismanagement, the impoverishment of the population and other aspects have led to uprisings for decades and grew into the revolutionary movement we see today. There is an interesting article on this at Lower Class Magazine.

It is an inspiring and cruel moment at the same time. Jin Jyian Azadi the slogan of the feminist revolution in Rojava, is now being carried on by the freedom struggles of women and queers in Iran. At the same time, protesters are brutally arrested, beaten, tortured and murdered every day.

These courageous people need our solidarity. They are fighting with their lives for their freedom, for equality, for emancipation.
The Iranian diaspora is very diverse. Less progressive forces are also on the streets here. It is therefore even more important that we support the feminist revolution here and give a voice to their demands.
Elephant in the Room did a fascinating interview on the feminist perspective on the revolution and the diaspora.

Our anarchist, feminist, queer hearts should beat faster and show solidarity in all possible ways, because it is a historically unique moment for the feminist struggle!