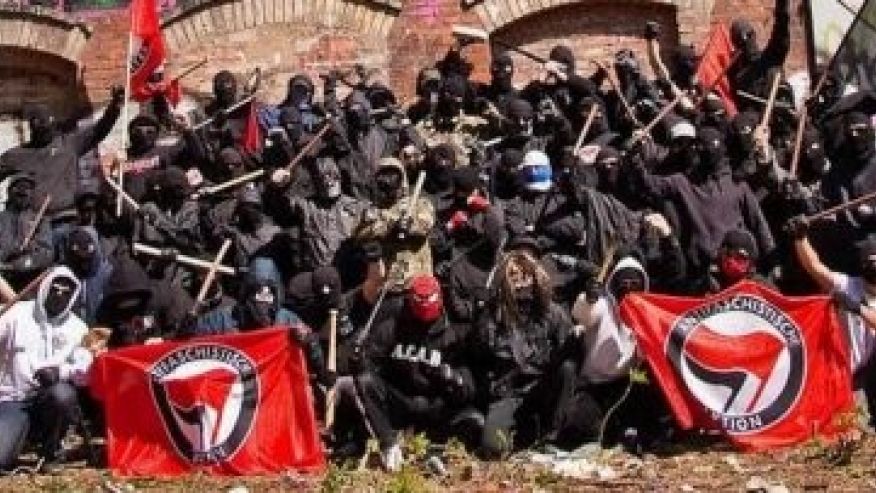 As anarchist I would have a lot of things to say about antifascism, mostly critics. I am not writing this text to do a theorical critics on antifascism, although I would like first to point out the mistake (to me) of focusing in only one particular thing, the same way as I think that antiracism or feminism, alone, are a mistake. Why, you would ask. Because, as anarchists we are well aware that the world is much more complex than a simple and easy manichean view on it, or on the society. There’s not only « monsters » and good people. Fascism is not the evil coming from the nowhere, but it’s the result of the society against wich anarchists are struggling since the 19th century, and before the coming of the European official fascism the world was not such a paradise, racism was existing, there were pogroms, women were badly treatened, children were working in mines, genocide was already part of the human history, workers were dying early because of a terrible exploitation, and anarchists were persecuted, sentenced to death or send to penal colonies in the Pacific islands or South America. Focusing only in fascism is a mistake because it’s build up a big evil, that doesn’t even have a lot of sense nowadays (what is fascism exactly again ? ), and to fight this big evil most of the time antifascists are acting threw the saying « the enemy of my enemy is my friend ». And this leads to a really problematic confusion among the antifascist movement (I am not talking about every antifascists of course, some know well where it stinks and with who they don’t want to hang out). But it also makes that you only see one single problem in this society, you only focuse on one thing, and erase all the rest.

As I said before, I don’t want to base my argument on a very theorical demonstration, so I prefer to name few things that are making me saying that there’s a problem with antifascism, and why with my own interpretation of anarchism I try to stay out of this movement.

I found that quiet funny (being sarcastic) to see today antifascists mobilising for Afrin, and on this occasion openly supporting an authoritarian political party (the PYD, satellite of the PKK and his supreme leader Apo), while in november 2017, so only few months ago, some antifa groups were participating in a demonstration against AFD in Hannover, demonstration where were also members of the Grey Wolfs, and in 2015 some antifa participated to an anti-pegida demonstration in Cologne, where there were pro-Erdogan’s with turkish flags (maybe that happened in other cities, I don’t know). In English there’s the saying « To run with the hare and hunt with the hounds » that suits completely to that way of doing politics .. and I mean « doing politics », because when you don’t have any ethic and just care about building a big camp against your enemy, it’s called the game of the politics, where you become completely blind and deaf on the complexity of this world, and you just care on making new allies in your war of Super Hero against the super Vilain.

In end of 2017 I had the opportunity to read an article written by some feminists from Parma, in Italy. The text was talking about a 18 years old woman who, in 2010, was the victim of a gang rape while she was unconscious. This kind of horrible stories are happening a bit everywhere, unfortunately. The reason why I am talking here about this particular gang rape is because the rapists were part of an antifa group, and they raped the girl in their own place where they have their antifa meetings, after drugging her, and they were stupid enough to film the scene, and to share it with their antifa friends, and to give a « funny » nickname to the girl (the « smoke girl », because they even used a smoke to rape her). The story came out of the light three years later when the place of Casa Pound (italian new fascists) exploded in Parma. The cops made an investigation on antifa groups in the city, and during a police search they found the video. They managed to recognize the girl (who never said anything about that for the past three years, and was completely alone with it), and they asked her who were this people, and we can easily imagine with the burden she had, she ended to tell some names of the few ones she could remember. Then, the antifascists of Parma started to harass her, to call her snitch, to threaten her by anyways, and to try to expel her out of the milieu. Of course, they were only seeing the fact that, in a way, she collaborated with the cops (the first ones with who she could talk about this horrible night, altough the video was shared and a lot of people knew about it), and they were of course not asking themselves how it is possible to do such a horrible thing. I mean, whatever your ideology is, drugging a person to do a gang rape is really something that says a lot about your concern about others … well, the feminists of Parma who wrote the text, at the time of the trial, and supported the girl against this creepy rapists, were making a parallel with this kind of behaviours and fascism. I personnally don’t appreciate the parallel, as fascism means something specific to me, and I don’t need to use the word fascist to call an asshole an asshole. But of course, by being really sarcastic, I would smile knowing that people calling themselves antifascists are doing gang rapes … and in the events of Parma, it’s not the matter of few individuals, because a lot of antifascists from the city were aware of this for three years, and no one tried to help this girl, people were making jokes on her, and that says a lot about what means nowadays antifascism.

What I also found quiet hypocrit in this situation is that they were using the sacred « don’t talk with the cops » to discredit the girl … again, I had one of this sarcastic smile, because in the recent years in Paris I have seen how much antifascists don’t stick to their rules when they have problems with the justice. In the case of the repression that came after the burn of a cop car during a demonstration in 2016, several people were arrested. A big part of antifas were among them. And because of that the events took an unexpected path. Only one person who was arrested did not collaborate with the cops, an anarchist, in jail for a year now, and who have been sentenced to 5 years. The others, they all accepted to talk, most of them to save their ass, and members of the AFA (parisian antifa group) accepted that their lawer use videos that the justice did not have, to prove they were innocents (by the way, it didn’t work to give new evidences to the justice, or to ask mummy and daddy to talk to the national medias). The picture of the super macho radical was scratched with that, but then I remembered that in 2013, during the demonstration after the death of Clément Méric, the same AFA was doing the security in the demonstration to try to prevent people to destroy shop windows and banks on the journey. I also remembered in 2016 when a group, definitively not aware of local anarchist and autonomous struggles, decided to protect the shop windows of Emmaüs (who collaborates with the anti-migrant politics in France) during a demonstration and to threaten on a very macho and homophobic way every one who called them, quite rightly, collaborators. I also remembered a year ago my non-surprise when I watched a documentary called « We are all vandals », from a national French TV channel, where the members of the AFA were making an interview in a park, with blurring, with one of the journalists that has put everyone in danger with his videos of demonstrations (videos that were used as main evidences for the trial of the burning cop car). I also remembered that this antifa groups in Paris took an active part in the pro-palestinian demonstrations … meaning, demonstrating beside right wing and left wing anti-semites, who find a common fight on this occasions … the last years the « anti-semite galaxy » was quiet active in France, and in the pro-palestinian demonstrations this people were showing off their belonging to this rotten ideas by doing the « Quenelle », the rallying sign of the anti-semites in France. At the very same time this pro-palestinian demonstrations were taking place, people identified as Jewish for whatever reasons, were physically attacked in the streets of Paris. So, that the antifa groups were participating to this demonstrations, even having streamers with anti-sionnist inscriptions, is again very problematic, and specially because they were demonstrating side by side with the people in France who are the closer to the fascist ideology.

My point here is not to ridicule the antifascists, but just to show how confuse is this movement (I mean in general). Not only they should have a clear-out, but also, anarchists could take their distance from it, because anarchism is obviously against fascism, but also against every kind of authoritarianism. Anarchism is also something in positive, that can not be sum up as « against » something, like is antifascism.

The conclusion I find when analyzing the antifascist way of doing politics is that the enemy of my enemy is not necessarily my friend, and sexists, racists, religious, authoritarians of any kind, have always, and would always, stab naive anarchists in the back. History of anarchism is full of unfortunate alliances, treasons for earning more power. Anarchism means antifascism, antiracism, antisexism, but much more than that. It means to reflect on the world that surrounds us, not to trust anyone interested in power (power in general, or power on close ones, like sexists do). It means to choose who are our accomplices, and to be suspicious when the speech of someone is targeting only one particular group of the population (in any ways, even when it’s « reversed » or « positive » like it became trendy nowadays among leftists). It means also not to choose a side when we don’t have our place in the fight ( choosing between Erdogan or Ocalan, between Palestine or Israel, between religious or racists, etc.)