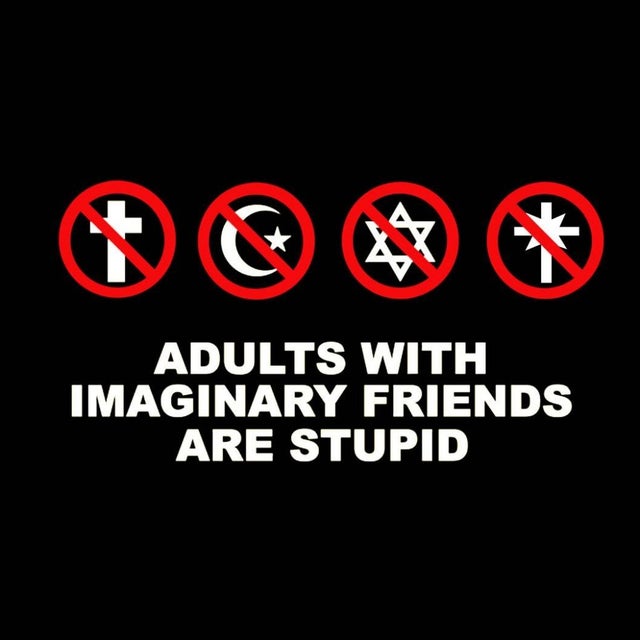 It’s been several weeks since the whole western world celebrated Christmas. Event that is sacred to one and annoying to the others. With consumption spree sky rocketing this days it is easy to believe that capitalists invented Christmas just to sell you presents for you relatives and friends. However beyond consumption Christmas is still a strong religious holiday, with hundreds of millions of people participating in its celebration.

In this issue we would like to touch shortly the issue of religion and what approaches anarchists have to religion and faith in general. It is worth mentioning that in this material we will be talking not only about Christianity, but also Islam and Judaism – three quite common ones for the “western” world including Germany.

We have little knowledge of that. The creature was never talking to anybody about his/her/its political preferences.

However we do know that in most of the cases religion institutes are conservative and take side of the most reactionary movements existing in the country. Examples can be found in different parts of the world at different times, starting with Fascist Franco Spain ending up with military dictatorships in South America. In those stories clerics were teaming up with reactionary parts of society in destroying progressive social movements and assisting in repressions of opposition. The role of church was well documented in different chronicles, that can be found all around internet and printed media.

Because of the strong support of state by organized religion anarchists were standing strongly against “god” institutions. Sometimes those struggles were going in intellectual field with anarchists trying to create alternatives to theories of organized religion, pointing that faith in god has little to do with humans trying to build their power around issue of higher being.

And although in some authoritarian states religion institutions did align with progressive side of the society it is in many situations was connected not with the point of moral choices rather than lack of possibility for the church to take dominating space. The best know example is opposition of church to the state in many parts of East Block, where church was perceived as hostiles ideological element to state socialism.

This prosecution didn’t change the fact that most of religion groups are fighting for power inside of the society and little have changed since first oracles trying to build their influence in society based on knowledge about what gods want.

It is worth mentioning that nowadays as well as historically religion institutions are not the ones that are suffering from the lack of money. Starting from selling “forgiveness” to those who behaved badly in middle ages, and ending up with modern production structures, that provide huge source of income.

It is worth mentioning that in 2016 only US religion institution were altogether having a budget equal to the 15th largest economy of the world. This includes not only donations from your daily live, but also different business, courses, production and so on, organized under different religious umbrellas.

In “secular” german state religion institutions are the only one apart from the state that can get money from the taxes. And sometimes conformity is quite dodgy – it is enough for your parents to decide for you to be part of some church.

So if you still believe that it is about faith in God and your moral values, than look at the number of profits and think again. Why service to the God should accumulate so much money and how the hell on earth it is connected with our eternal life afterwards?

You can believe, but let’s not make it into religion

One of the alternatives that some anarchists argue for is demolition of religious institutes, but keeping your faith in God. Meaning that you can keep believing in higher entity, but those institutes that were established by the humans have little to do with your faith. Thus even such a mild position advocates destruction of the whole oppressive infrastructure.

Instead of that holy texts are considered to be something of individual perception without any attempts of centralized clarification of what this or that part of the book means.

At the same time within different religious streams there were well known anarchists, advocating for freedom of individual under rule of God.

“No gods no masters”

The more common position among anarchists is complete move to atheism, without any space for church or individual faith. In the world of equals there no place for the higher authority that decides who is good and who is bad.

In the world where god exists it essentials for humans to overthrow the god and take over the heaven. It is up to our society to decide what is acceptable and what is not, through discussions, common moral principles and logic, rather than super being that has it’s own “great plan” for all of us.

Thus we will push away the angels and bring down the heaven to Earth. We do not want to be judged by some tribunal on individual level as we are society and have way more complicated rules than individual responsibility over certain behaviors.

Understanding the world beyond god is also understanding the world where you don’t do certain things not because somebody is going to punish you and send you to hell, rather that your own principals won’t allow to do this or that. As example a lot of anarchists find right for life as one of the essentials ones that nobody else can take away.