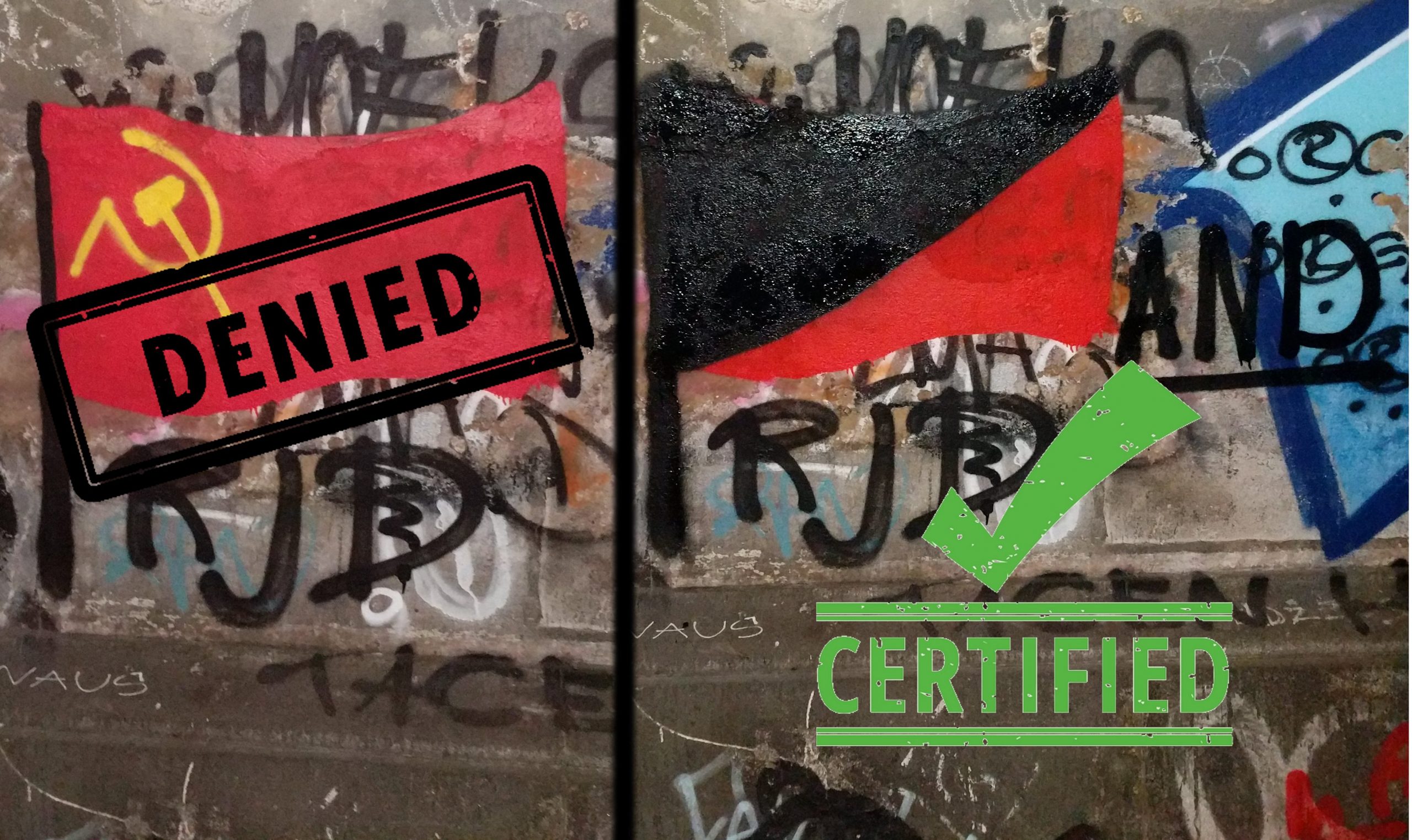 In many public and alternative places around Germany you can find people painting hammer and sickle. Stickers with those symbols are combined with slogans for liberation and freedom. It seems like a lot of people have faith that this symbol is directly representing all the currents of the communist movement. It goes mistakenly to the extent that some of the anarchist next to traditional a in a circle paint hammer and sickle to show their affiliation with anarcho-communist movement.

We decided to use this time our “symbolism” section to demystify hammer and sickle and finally make clear for everybody the background of the symbol and what it is associated with.

It is true that through the 19th and beginning of 20th century different variations of hammers on symbols where associated with industrial workers movements. Sickle at the same time was widely use to represent peasantry struggle in different parts of the world. Before that both symbols were used in cultural and social references in different variations.

Hammer and sickle in the form as we know it was created by the Moscow artist Yevgeny Kamzolkin for the decoration of 1. Mai 1918 in Moskau for Bolsheviks. In the Soviet Union symbolism was used by Bolsheviks as part of ideology of unity of workers and farmers. Der 5. Allrussische Sowjetkongress choose the symbol as state symbols of soviet union (red flag with hammer and sickle as state flag of soviet union) as well as red army symbolism. Under this symbol bolsheviks developed a repressive regime. Hundreds of thousands of people which were not following the ideas of bolsheviks where shot by Tscheka and a GULAG system was established in which millions of people lost their lives because of hard work, starvation, exhaustion and harsh living condition. With huge influence that soviet union delegations were playing in Comintern it is seems plausible that soviet union did quite a lot of propaganda to establish hammer and sickle as symbols of communist movement. In period between two world wars communist parties in many countries around the world start to adopt hammer and sickle. Today authoritarian regimes of China, North Korea, Laos and Vietnam are still using hammer and sickle.

How hammer and sickle in Germany becomes such a widespread phenomena is something not really well described. However already during 20th and 30th communist party of Germany adopts symbol for the use. Later on authoritarian communist groups are using hammer and sickle as their symbol to point their affiliation to the authoritarian communist schools of maoism, stalinism, trotskism or leninism, all of which contributed quite a lot in destruction of the revolutionary workers movement at the beginning of 20th century.

It is extremely important for us to point that hammer and sickle was never associated with anarchist movement as well as any wing of antiauthoritarian/libertarian communism. Those movements were critical of Bolshevism almost from the very beginning of the counter revolution in soviet union.

If you are asking yourself what will represent your affiliation to the anarcho-communist or libertarian-communist movement we would recommend going with classical black and red flags and circle-a.