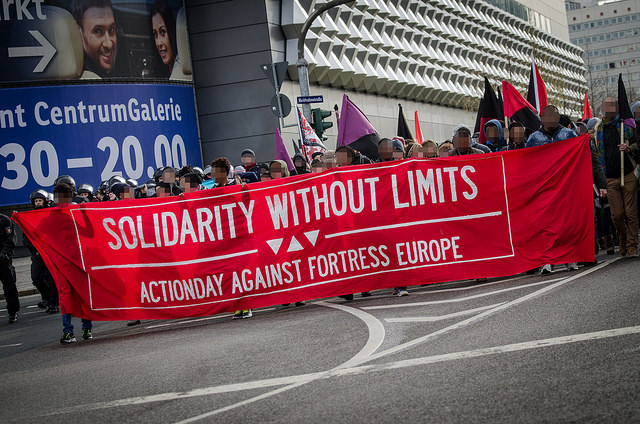 September was filled with theoretical discussions and presentation on anarchism and different sides of it. Libertarian days did bring a lot of people closer to the idea of anarchism. However sympathizing to the ideas is one thing, organizing to reach those ideals – is completely different story.

To prove that anarchism is a living alternative to capitalism we have to get organized and this is our call to you. In case you are still hesitating or you are completely alone and don’t know what to do – we will try to help you out.

One of the most important parts of organizing yourself in political struggle is actually picking up the topic that you wanna address. Talking about revolution in abstraction is quite easy, but to apply those abstractions is quite a challenge. One of the main things to consider in this question is actually looking at what YOUR problems are in current capitalist society. Are you studying and have huge debts? Are you jobless and have problems with job center or your job is destroying your life? Are you sincerely touched by the problems that immigrants are facing in this country on their way to freedom? Ask yourself what is the thing that you wanna fight for with all your heart in and get involved into that.

However please be aware that political organization shouldn’t be a sort of hobby that you give up by the time you find another hobby. Being politically active means taking responsibilities for the issues in the society you are living in. If you find yourself in situation where you can walk away there are always thousands of thousands of those who can’t, so it is important to keep up what you started and keep fighting.

The best example of this is the wave of solidarity with migrants in 2015-2016 that brought quite a lot of people in contact with problems migrants face not only in Germany but all around the world. However this wave was over as fast as it started with quite a huge piece of those involved dropping out due to many reasons. This dropping was easy to do for those who didn’t face the problems directly, however this big group of migrants was primarily left alone with german “social” state and it’s wing of NGO workers.

So getting involved in struggle is also a responsibility you have to consider. Do you have time and will to join the political struggle? Are you ready to put priority to the struggle and maybe sacrifice other parts of your life that you enjoy? It doesn’t always have to be so but sooner or later you will have to choose and you’d better keep that in mind.

As soon as you decided you can always have a look at groups that are already there easily to join:

All of those are friendly to single people and groups of friends who wanna do something.

Apart from those there are also some anarchist collectives that doesn’t seem to be opened for the general public.

There are many leftists and antifaschists groups in the town that you might consider joining with anarchist ideas, however for the new person it might be challenging and quite easy to loose yourself in subcultural circles rather than political struggles.

In case you didn’t find something that is appealing to you, you can always start your own group and address the issues that you consider important. From one side it might be quite a big work to do but from the other – nothing motivates you better than fighting for the things that matter to you.

And event if you decide not to start a new political group you can get together with your friends and organize something that is called affinity group – a tight circle of friends that are joining different struggles upon their decision. That means that your agenda can shift from work place organizing to struggle against police law with the decision of the group.

In general whatever you decide to do as anarchist activist you should always remember that we are strong only if we are standing together. Collective efforts are way more effective than individual struggle against capitalism. It might be appealing to be a lone wolf fighting against injustice in this world directly from pages of comic books, but the world can truly be changed through collective struggle and cooperation.

So don’t hesitate and start organizing!