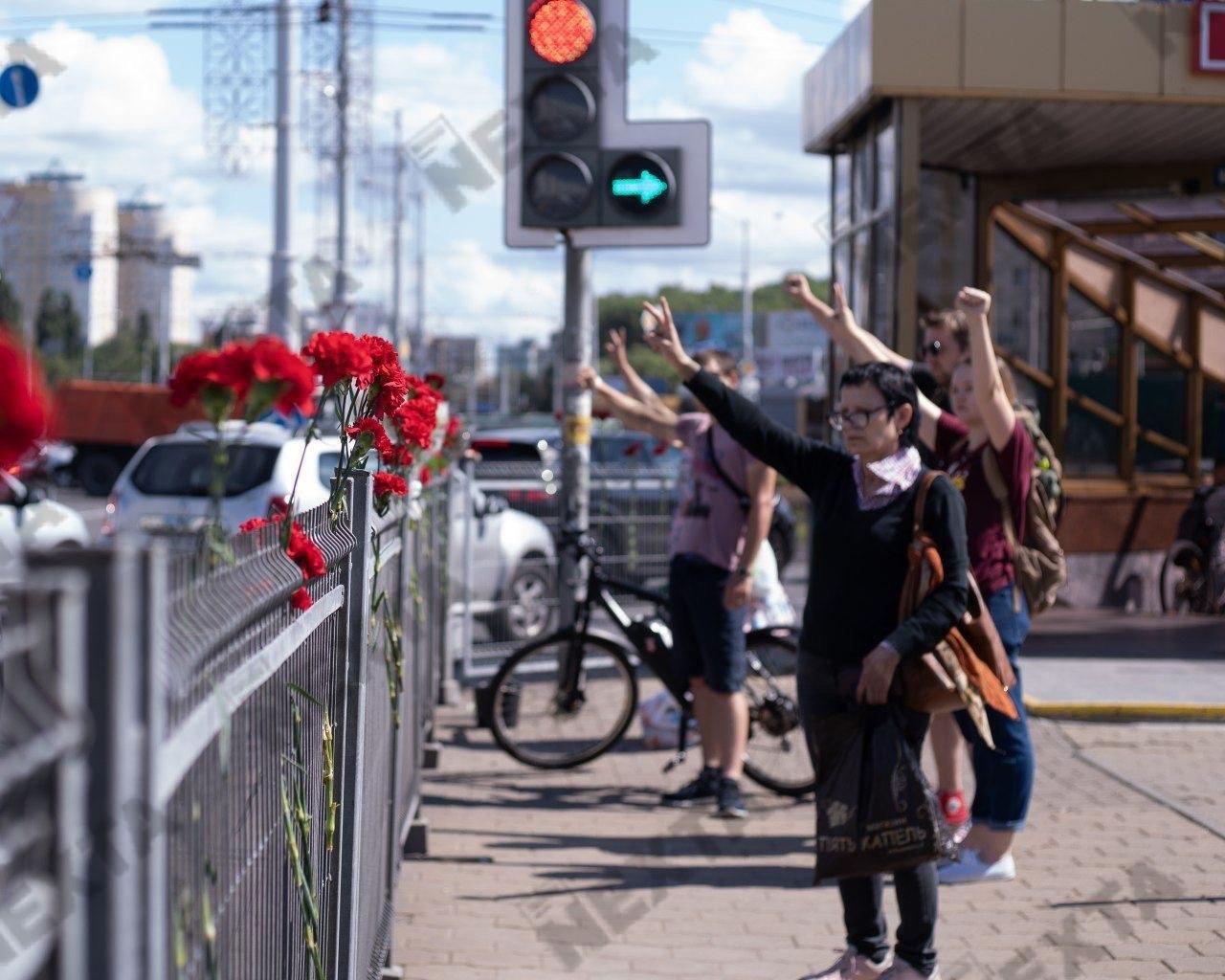 A short overview about the events happening during the day (Tuesday) that are known to us.

The day began with the information of another dead person killed by the cops yesterday night. People brought first flowers to the place were he was murdered later flowers appeared in different places in Minsk.

After last nights intense clashes with the police in several cities people continued to protest in various ways during the day, banner where dropped, people gathered in public places, leaflets were spread around to call for strike and to call the military to stop support Lukashenko regime and workers where striking.

On Monday people were calling for a national strike. As the internet doesn’t work leaflets were spread around to reach to the people. On Tuesday, 11. August in different factories groups of people came together and agitated for strike. Workers of the Electrotechnical Plant in Minsk «МЭТЗ ИМ. В.И. Козлова» published the following demands:

1) Immediately stop violence against peaceful unarmed citizens who have the right to peacefully express their political position!
2) Cease provocations to justify the actions of law enforcement officials.
3) Release people detained during past peaceful demonstrations.
4) Turn on the internet to avoid speculation and rumours.

People met spontaneously in Solidarity with the workers in front of the factory. But the riot police dispersed the people an detained at least two people. Workers of the sugar plant in Zhabinka – Жабинковский сахарный завод completely stopped their work today and went also on strike. The workers gathered and demanded to meet with the Chairman of the District Executive Committee to put forward their demands. Also individuals went on strike, like those two who are working in the plant of semiconductor devices of JSC „Integral“. The rest of the plant workers support the guys, but they were concerned to join because of the pressure from their superiors.

Strike happened as well at the Institute of Chemistry of New Materials NAN of Belarus Институте химии новых материалов НАН Беларуси. Also RUE Belenergosetproject, Minsk called for strike and 70 engineering and technical workers from several departments of the Minsk Tractor Factory Минский тракторный завод was joining the strike. At lunchtime, the deputy director for ideological work came out and began to frighten them. But nobody believed him. Because nobody believes in ideologists anymore. Also the 4th trolleybus park – drivers refused to go to work on the second shift after information about an injury to a bus driver.

But also the security forces are not restless, during the whole day police were present in the city and chasing  and detaining random people.
The cops drove already yesterday in big Buses, usually used for public transport. In Minsk, some ambulances were seized by force and then drove around the city and detained the protesters on Monday. In Brest medics were yesterday attacked and hindered at helping seriously injured people by OMON (Bereitschaftspolizei). Some injured were brutally beaten up and some were detained. Medics needed a permission by OMON officers. And the emergency number 103 did not accept calls from ordinary citizens, rather only from the police. Because of the brutal assaults of the police a lot of people are in hospitals, even so no numbers are available on how many.

The police published for Sunday 3000 and for Monday 2000 detained people. Which means that by now are more than 5000 people imprisoned. Taking in account that 40.000 people is the general amount of people belarussian prisons can fit in and the fact that prisons in Belarus are already overcrowded, it becomes obvious that there is no space left. People are distributed in all kinds of prison and police stations. People are treated with violence and torture. A lot of people are also reporting that people were put in buses, got beaten up and brought to random places.

Usually relatives are bringing clothes, sanitary products and books to the prisons. But people were waiting the whole day in front  of the different facilities and didn´t get list of prisoners and information’s  where to find relatives. You can find detailed information on detainees on the website of the Human Rights Center „Viasna“ (http://spring96.org/ru/news/98894).

The most wierd incidents of the day: Stuff from the city of Minsk was busy the whole day removing benches and things that are standing around and could be used as barricades!!!

CALL for the EVENING

BELARUS! 19:00!
WE’RE BACK ON THE STREETS!
Yesterday Minsk showed the whole world that it’s absolutely real to defeat numerous and armed forces of punishers! And the protest tactics, in which law enforcers are scattered all over the city and have to constantly feverishly move in search of groups of peaceful protesters, turned out to be the most successful. From now on, our tactics are as simple as possible.
DECENTRALISATION! BE LIKE WATER!
The security forces will obviously be ready to meet the demonstrators at some specific points. Especially on Independence Avenue in Minsk. And this is their weakness.
STRATEGY!
✅ Get out of your houses, meet your neighbours and gather in small groups of up to 20 people.
✅ Don’t stand on one point! Move towards the city centre in small groups, but do not go out into the central squares – the security forces are ready for this. Take all the surrounding streets and the Road Block! PARALYSE THE CITY!
MINSK! AVOID THE SQUARES ON INDEPENDENCE AVENUE, AS WELL AS PUSHKINSKAYA AND RIGA.
DO NOT LET AMBULANCES PASS UNTIL YOU ARE SURE THAT THEY ARE REALLY MEDICAL!
✅ If there are not many of you, and law enforcement officers are attacking – run, regroup and appear elsewhere. There is no shame in retreating! BE LIKE WATER!
✅ OUR PROTEST IS PEACEFUL! Do not attack the bandits in black first! Be ready to defend yourself and do not forget your protective equipment: helmets, shields, tight goggles, gloves and gas masks/respirators. Don’t forget to protect your body – thick glossy magazines or books can be wrapped up for this purpose! They save you from rubber bullets. Try to disable equipment, not fascists!
Be ready to defend yourself against the provocations and violence of the Lukashists.
✅ OUR SLOGANS ARE SIMPLE!
ELECTIONS WITHOUT THE CUNNING!FREEDOM FOR POLITICAL PRISONERS!
We stand for freedom! For the end of a 26-year dictatorship!
Fascists in black uniform have already killed Belarusians who just wanted freedom, while dozens of peaceful demonstrators are in serious condition in hospitals.
THEIR VICTIMS SHOULD NOT BE IN VAIN!