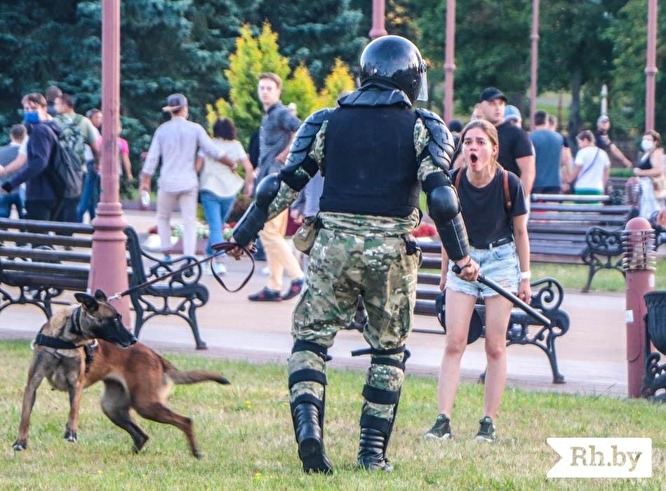 ATTENTION: detailed description on police violence and torture!
16-year-old Timur M. is now lying in the intensive care unit of the 3rd Children’s Hospital in Minsk. He was taken there from Partisanski police department on August 13. On August 12 he was detained near Kamennaya Gorka. The boy was in an artificial coma. He was beaten very badly, he had a traumatic brain injury, brain concussion, open fracture of the zygomatic-orbital complex, convulsive syndrome, paraborbital hematoma on the right, multiple contusions of soft tissues and extremities, traumatic corneal erosions of both eyes. The family plans to contact the prosecutor’s office and the Investigative Committee to investigate and bring the perpetrators to justice.
– Yesterday we managed to talk to Timur, when he hears the word „police,“ he begins to have a panic attack, his eyes were poked out with a stick,“ says the mother of the teenager, Tatiana Nikolaevna.
On August 12, Timur was supposed to go fishing with a friend to his summer house, the boy was on the way to his place. But Timur went missing: he never arrived at his friends place, the family started looking for their son. On August 13, his Mom got  a call from school and was told that Timur was in hospital. He was taken to the 3rd City Children’s Hospital by ambulance from the Partisanski police department. Now the boy is in intensive care, he was put in an artificial coma.
Tatiana Nikolaevna got her son’s diagnostic report from the hospital, the diagnosis takes six pages. Timur has a mild head injury, brain concussion, open fracture of the zygomatic orbital complex without displacement of the right (fracture of the maxillary sinus without displacement of fragments, linear fracture of the orbital floor without displacement of fragments), hemosinusitis of the right maxillary sinus, convulsive syndrome, paraborbital hematoma on the right, multiple contusions of soft tissues and extremities, traumatic corneal erosions of both eyes.
– He was detained at the dispatch station „Zapad-3“, this is near the subway station „Kamennaja Gorka“ – says Artem, brother of Timur. – He was beaten during the detention, then put in a police truck, after that they made several stops where he was also beaten. He got to the hospital on August 13. He said, that he was hit on the heels with an electric shock, they said „You’re going to sing the OMON anthem now,“ he refused, then his head was overturned, he was held, a stick was put in his mouth and hammering it. Timur says that he was still lucky: a stick was put in the rectum of a man who was next to him  and a 14-year-old boy was beaten on the groin.
According to Artem, Timur is already conscious, and he said that after the torture they wanted to throw him in the basement. But some man came and said that it would be on their conscience, so they started first aid and called an ambulance.
– The Doctors say that his condition is improving, he was taken out of his coma, yesterday he talked to me for 30 minutes, joking and laughing. Last night the police tried to get to him. We also got a call at home, saying they’d be considering Timur’s situation for a criminal case, I understand, for the OMON officers,“ Artem said.
Timur is still in intensive care; he comes from a large family with nine children. He goes to school and is fond of fishing.
Timur’s family will appeal to the prosecutor’s office and the Investigative Committee to investigate and prosecute the perpetrators.